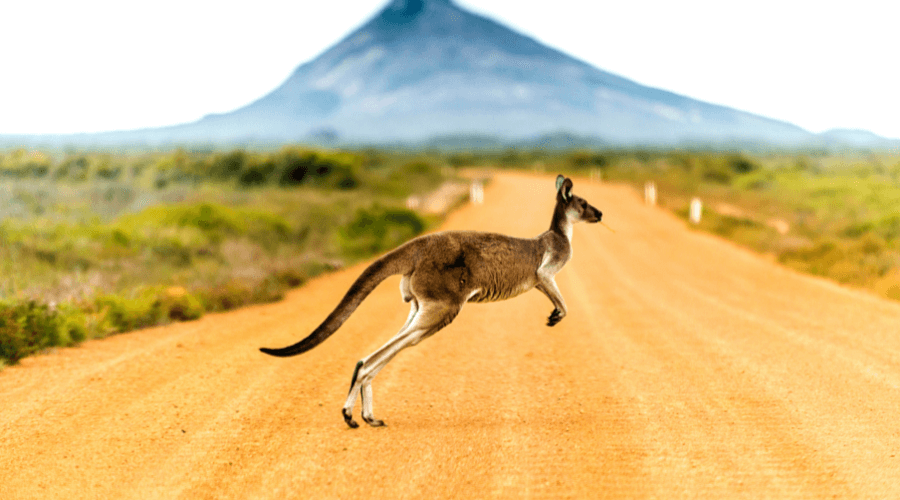 27 Unexpected Things You’ll Come Across Whilst Driving Around Australia

You might be familiar with the road etiquette, rules and laws, but there’s nothing that prepares you for what you’ll encounter while driving around Australia. There’s more than traffic and different time zones; as the saying goes, expect the unexpected, especially when starting your Big Lap. Here’s what can shock you, surprise you or get you mad!

No matter how much attention you’re paying to the road, a wild roo will try and attack your vehicle. Even if you’re letting them pass, they’re good at picking the precise moment you take off and throw themselves on your bumper. That’s the moment you’ll rethink investing in a kangaroo protector and whistle.

Read Next: 19 Unusual Animal Experiences You Shouldn’t Miss On Your Big Lap

2. Spiders The Size Of Your Head

Spiders are nothing new in Australia but meeting them in your camper while on the road is, ahem, unpleasant. The occasional giant spider is the fee you’ll pay for driving and camping in untouched nature. Don’t worry, since 1981; there’s an antivenom even for deadly spider bites.

There are 150 volcanoes in Australia and only one active. It’s located on the McDonald Islands and last erupted in 2005. Before that, it was dormant for 75,000 years and became active again in 1992, erupting three times since then. It’s the home of penguins, sea birds, seals, and zero people.

4. More Snow Than On The Swiss Alps

Yes, it sounds about right. Cancel your Swiss skiing vacation and stay in New South Wales instead. The Snowy Mountains receive more snow than Switzerland. The secret lies in the positioning- The Snowy Mountains are set on the coast while Switzerland is a landlocked country. The coastal region gets more precipitation than inland regions, and when it’s cold enough, they receive more snow.

5. A Vast Amount Of Roadkill

The amount of roadkill on Australian roads is insane. There are approximately 10 million mammals killed each year. The number is so high that it even threatens whole species. Tasmania holds the unpopular title of the roadkill capital of the world. Using any part of the dead animal is illegal.

Skylab was the first US space station that met its fate in 1979. It rapidly descended from orbit, and while NASA hoped it would land in the Indian Ocean, it went through parts of Western Australia. Large chunks and debris were scattered in the West Australian fields near the Nullarbor, and there are still remnants in the Balladonia Roadhouse.

We know Australia has some exquisite wines and boutique wineries, but 60 designated wine regions still comes as a surprise. No wonder there are people with a wine glass in hand everywhere you turn! Australia is home to some of the world’s oldest vines and produces more than 100 different grape varieties.

Read Next: 7 Incredible Hunter Valley Experiences To Have On Your Big Lap

Wallabies love their poppy seeds even unripe, so they frequently get high on opium. The funniest thing is they graze in circles after they’ve had their portion of poppy seed field exploring. They jump in circles even through crops, leaving the landowners wondering what happened.

If you visit one Australian beach every day, you’ll need approximately 27 years to finish them. Each coast holds something special that makes their beaches unique; there’s no one like the other. It’s no wonder 90% of the population lives around the coast!

Read Next: Top Beaches In Victoria

10. The Longest Fence In The World

The Dingo Fence is the longest fence in the world. What started as a dingo barrier in 1885 quickly became a 5,614 km long fence – three times more than the Great Wall of China. It stretches from Jimbour near Dalby to the Nullarbor Plain.

The Nullarbor Plains holds the record for the world’s longest straight road and can be seen from space. Analysing some satellite images, astronauts came to the conclusion that you can spot around 20km of the Nullarbor from space! Not really Nullar-boring now, right?

There’s something about frogs and camp toilets that no one can get the hang of. Is it the moisture, darkness, or they just want to keep you company. Anytime you enter a bush camp’s toilets, check for green frogs so that you won’t jump in shock at an unpleasant moment.

Australian vehicle owners have a lot to say – and they do it via bumper stickers. As long as they aren’t obscene, pornographic, or blocking your view, they’re legal. A bumper sticker can make your day while driving on a boring road.

The Big Lap doesn’t strictly require a 4WD, but most lappers decide to get one for the long road. On your trip, you’ll see more 4WDs than any other vehicles. Even those not keen on off-road driving pick a 4WD over a 2WD. Half of the population is against 4WDs in the city, while the other claims it’s perfect for their large family.

15. More Than 100 Aboriginal Tribes And Languages

It’s crucial to respect and pay attention to the Aboriginal heritage along your trip around Australia. There are 500 Aboriginal Tribes and 250 dialects; you’ll come across just a crumb of them. You’re allowed to visit and experience their sacred lands, take selfies but be aware of how you promote it.

The Cape Grim Peninsula in northwest Tasmania is the proud owner of the cleanest air in the world. While the rest of Australia complains about how air pollution standards are too low to keep us healthy, Tasmania enjoys the title of cleanest air.

Looking for a simple, free camp for the night might surprise you. Many landowners welcome campers on their large, unused property. They’re often bush camps with no facilities, but it’s a very generous gesture, so make sure to pay your respect.

From koalas to ants, camels, fish and even meatballs, giant things are all over Australia. There are over 150 big versions of things scattered around the country. There’s no explanation; it’s an obsession! You can even plan a road trip around the big things!

19. A Meltdown In The Outback

If it’s your first time travelling the Outback, you might get shocked at exactly how hot and humid it is in summer. With the law forbidding you from rolling down the windows when surpassing other cars, you’re left relying on the car’s air-conditioning. Now imagine the AC breaking. You’re facing a physical and mental meltdown.

A post shared by F R E Y A. (@freyatajelliott)

20. The UFO Sighting Capital Of Australia

I can’t guarantee you’ll get an extra-terrestrial experience, but you’ll have fun touring Wycliffe Well Roadhouse, the UFO capital of Australia. Located in the middle of nowhere, this roadhouse is full of newspaper cutouts, alien statues, murals, and spacecraft types.

What’s worse than crossing your path with a lethal animal on your year-long road trip? The box jellyfish, saltwater crocodile, Taipan snake, blue-ringed octopus, stonefish, redback spider, and the great white shark are the top tier killer animals of Australia. They’re both on the ground and in water, so beware of suspicious territories.

Service stations in the middle of nowhere are a Godsend, but they are known to go overboard on their prices. You might pay $2 more per litre of fuel at some remote servos than at a nearby town. So you’re not cheap for toping your tank in every larger town; you’re smart!

A car breakdown on your Big Lap is a bummer. No matter how much you checked your vehicle before hitting the road, there’s a list of things that can go wrong. Driving in different road conditions for hundreds of kilometres a day takes its toll on your car. From a flat tyre to a bumper break, anything is possible. Best case scenario – you’ll find a mechanic at the nearby servo and get back on the road in no time!

The Ibis is one weird, intimidating and beautiful bird at the same time. When stopping down the road to throw out your rubbish, check for Ibis first. They can jump and scare you or harass you for food. They’re harmless to people, but their size and beak are scary. Ibis droppings can even destroy some plants!

From daytime use areas to camps, free barbecue grills are anywhere you turn. Free public barbeques are not a common sighting anywhere in the world, and they’re rarely coin-operated. The open-air barbeque is part of Australia’s charm and counts as a national treasure. Having a hot plate a kilometre away at any time sure is convenient!

You’ll acquire hundreds of new friend while driving in Australia and make lifetime memories with some of them. People will help you fix your car, tent, or stove and show you the best sites and restaurants. But people will also run their generators until late in the night, park right beside you and have loud conversations until morning.

27. An Urge To Rush Home Early

When preparing for your Big Lap, the thought of coming back early never crosses your mind. But once you’re on the road for quite a while, you might get the urge to go back home. Whether you feel nostalgic, overwhelmed or can’t get used to the nomad life, do as you sense.

Read Next: Everything You Need To Know About Staying Connected During Your Australian Roadtrip: Your Guide To Big Lap Internet & Phone Service

Top 16 Cultural Experiences To Have In South Australia

Where do you stay – caravan parks? Free...

The Best Reverse Cameras For Your Caravan

Our Top Tips For Feeding A Large Family...

Why Lockdown Is The Perfect Time To Plan...

Your Guide To The BEST Generators For Free...