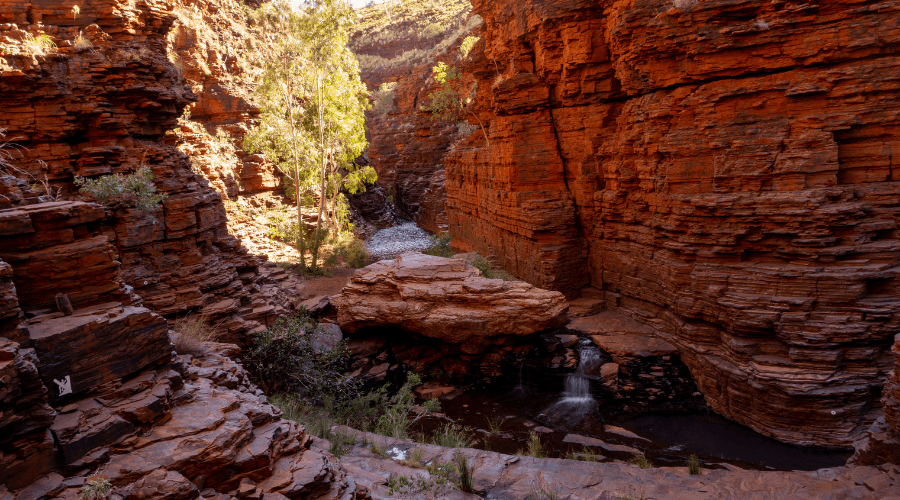 Karijini National Park – A Must See On Your Big Lap

Being on the road you meet so many people following the same or a similar path to yours. The standard questions asked – “Which way are you heading?”or “Where have you been?” The conversation continues and more often than not, someone will ask, “did you go to Karijini National Park?” I love this question because it means I get to talk about a place that should be on your list to see in Western Australia. It appeals to the designer and photographer in me purely for its forms, colours, and textures, and also the part of me that loves a bit of a physical challenge.

Read Next: 18 Of The Best Walks In Australia That Even Non-Hikers Will Enjoy

Karijini National Park – Everything You Need To Know

Roughly 50kms from Tom Price you will find these unique gorges. Formed more than 2500 million years ago these banded rock formations showcase Australia’s north west region magnificently. Karijini has it all, from wading through freshwater and mountain goat climbing to relaxing under waterfalls and show stopping lookouts. Depending on how much you would like to achieve in a day, at least three days in this National Park is recommended. We personally made it our mission to hit every gorge walk and managed to smash it out in three days. Let me tell you, bedtime for us on those nights was averaging around 6:30 to 7:00pm!

There are two options for camping within the park, Dales Campground, and the Karijini Eco Retreat. We opted for Dales which is a great base especially if you are towing. It has basic facilities including picnic tables, barbeques and toilets. Karijini is quite a big park, the gorge trails are quite spread out and require a 4WD. This being the case, we made our way out and worked our way in.

Our first trail saw me ever so gracefully sliding down a rock (in front of many people) because of a wrong shoe choice and actually realising what the next three days were going to entail! After this walk, I became the person who would ask anyone who had just completed the trail we were about to embark on – “How long did it take?”, “Was it really hard?” Having had three knee surgeries I am definitely set on not having another! I needed to know what I was in for.

Knowing I wasn’t the only one out there asking these questions, I decided to give you an insight into what each gorge trail is like when exploring this epic park.

Northwest of Karijini is the most remote gorge of the park, Hamersley where it all began for us and where I turned bright red to match the beautiful banded walls of rock. This trail is one of the easier walks (how ironic) with some rough steps down onto the gorge floor. From there you are surrounded by colour, texture, and all these different shapes that were formed millions of years ago. The walk is about 1km return and took 30mins one way. At the end, you are greeted by a beautiful waterfall that you can continue to climb up! It has beautiful pools before the water flows into the swimming hole below.

Using the Australian trail classifications, this amazing walk is a class four that eventually turns into class five, meaning it is moderately difficult but oh so worth it. This trail was the first where we had to wade or swim (depending on height) through water. Having purchased a brand-new camera before our trip that is attached to my hip, my recommendation to anyone is take a dry bag with you or get a really tall boyfriend who can hold it above his head. As you make your way through, the gorge slowly narrows and you walk downstream leading to the hand rail where both hands and feet are needed to climb down a vertical drop of stepping stones to reach the pool. This trail is 2kms return and took roughly 30-40mins one way.

Adrian and I do like to get a lot completed in a day! Seeing as Lower Weano Gorge & Handcock Gorge are next door to one another, we thought we would smash both of these out in one day. Handcock Gorge, home to Kermit’s pool, for obvious reasons was a trail that I really enjoyed. A short but still challenging trail leads you down a ladder, narrow walkways and through the infamous Spider Walk to the green waters of the pool. Just by chance, we managed to get there at the perfect time as the sun only hits the pool for 1 hour a day at around midday. An 800m return walk, it took 30-40mins one way.

There were two trails in Karijini that required me to bring out my inner mountain goat. Joffre Falls was the first. The majority of the 3km return walk, rated as class 4, was quite easy (my confidence had returned at this point). As for the last 150m, being the descent into the bottom of the gorge quickly, it turned into a class 5. Heading down, something that my knees don’t necessarily like, I found it easier to do the old, sit down and drop your legs. This walk took us 45-50 mins one way. Hitting the bottom is the first pool downstream to the most beautiful waterfall. Be careful, the rocks below are harsh on the feet! For all of the trails (except Hamersley Gorge) Adrian and I wore diving boots which worked a treat, another common choice of footwear I noticed was Dunlop Volleys.

If you have had a hard couple of days and need to give the body a rest, Dales Gorge is the one. There are well-formed man-made stairs down to the gorge, with a pathway down stepped rocks to the base of Fortescue Falls. Here, you can enjoy the pool and float while taking in your surroundings! Fortescue Falls gets quite a bit of sun which makes it a beautiful place to lay like a lizard on the rocks.

If you prefer a quieter setting, make your way down to Fern Pool. From the base of the stairs, make your way upstream with a 300m easy walk to one of the most amazing spots in the park and possibly one of the most recognised. There is a deck for easy entry into the pool and is definitely a spot you could spend all day at. It is a 1.2km return walk from both Fortescue Falls and Fern Pool – it took us 15-20mins one way.

A consistent class 4 trail that’s 3kms return from the beautiful Rock Arch Pool. After the initial descent into the gorge, it’s a rather easy walk following a beautiful stream, crossing shallow water with a small amount of ledge walking on some slippery rocks. Although if you don’t feel up to the 3km walk, you can walk to the small waterfall with its permanent pool as soon as you arrive at the base of the gorge (definitely worth the 3km’s though). It took an hour one way to the Rock Arch Pool and being the mountain goat Adrian is, you can climb up into the arch which gives you an amazing view of the gorge itself (so I have been told).

Somehow, we always manage to save the best and hardest until last, Knox Gorge, in our opinion, was definitely the hardest. A class 5, 2km return trail that required our last bit of mountain goat energy, it took us 45mins one way. The walk down into the gorge was a killer with no real defined track and required both hands and feet to make your way down and back up. The scenery along the way, the pool, and view when we had when we reached the end were out of this world. Karijini was really showing off with this one! Making your way down into the pool is super steep, it required Adrian to pull me out of trouble once or twice as my legs weren’t long enough to reach the next slippery step up or down.

A designer & photographer thrown into the deep end when it comes to all things camping & 4WD. Getting the good type of lost.

Everything You Need To Know About Weights, Caravans & Towing

Towing A Caravan For Beginners: Here’s What You Need To Know