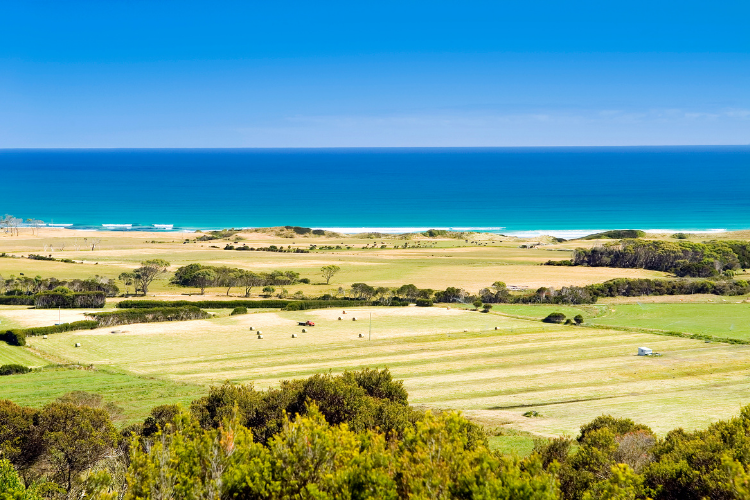 Aussie Travel Stories – Setting Up Expectations On The Big Lap

Aussie Travel Stories - Setting Up Expectations On The Big Lap

Newly engaged Lyss and Isaac from @thesaltycircus_ share with us their (crazy) great adventures in travelling the Big Lap.  Having travelled more outside Australia, check out how they decided to take the big step to explore the country on their Troopy and free camps.

Learn more tips about budget-travelling from this Aussie couple, how scary experiences turn into life lessons, a place and products they are not keen to recommend, the biggest splurge they’ve ever made for the Big Lap and was it worth it, and that one item they or probably most campers/travellers can’t live without.

Welcome to Aussie Travel Stories, the series where we ask Aussie travellers questions to help inspire and educate the Big Lap community to enjoy the greatest road trip of their lives.

Isaac: We are currently travelling full time for the next 12 months or so around Oz, we left in October so we’ve been on the road for just over three months.

Where are you currently, and the route you’re taking?

Lyss: We did a bit of time on the South Coast of New South Wales before we headed into Canberra along the Murray River, and then over the border into Victoria, we headed for the Mornington Peninsula and then did some time on the surf coast where we ended up spending an extra few weeks in. We thought we would until we headed over into Tassie for six weeks over Christmas.

Why did you decide to do a Big Lap?

Isaac: Well, we’ve lived in Oz, our whole lives pretty much and we realize we’ve done more travelling abroad than we have in our backyards. So, with all the overseas travel restrictions, we thought, why not get out and explore our own country?

What is your setup?

Isaac: We’re just travelling in a Toyota troop carrier, we’ve decked it out with a bit of a bed in the back, which we’ll show you soon. We don’t have a pop-top or anything, it’s a pretty simple tight little setup, but we’ve gotten used to it in the last few months that’s for sure.

Lyss: And it does the job. 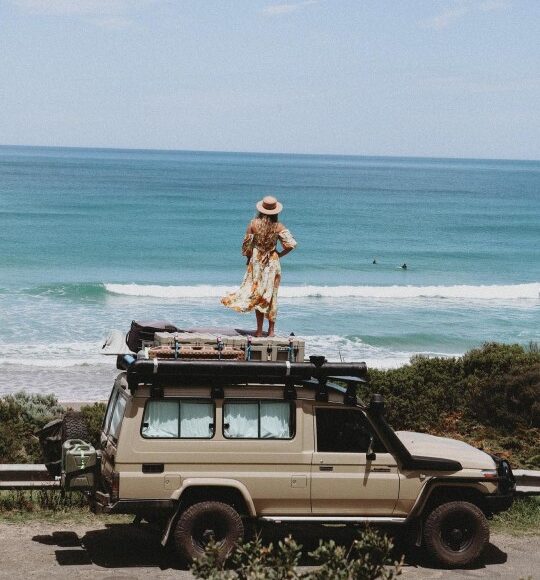 Where do you stay – caravan parks? Free camps? Both?

Lyss: We generally stay in free camps where we can the majority of our camping has been free camps when we need a hot shower and to do some laundry, that’s when we tend to book into a caravan park but that would be…

Isaac: Yes. Once a fortnight maybe if that.

What is the best camping spot you’ve stayed at?

Lyss: Yes. And the free camps in Tasmania, there’s so many that you find a lot of the time you have a spot right on the beach or right on the lake by yourself with no one else in sight, so.

Isaac: We’d be pulling up to these campsites, can’t believe they’re free.

Lyss: Yes, so Tasmania would be our favourite so far. 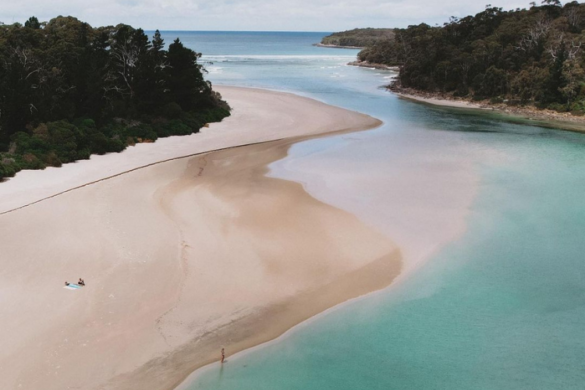 Where is the best place you’ve ever been?

Isaac: My favourite place was probably Marrawah on the west coast of Tasmania, it was a pretty roar and rugged, I suppose I get the roaring forties down there, but we had some unbelievable weather and just had two or three days of unbelievably fun surf where it was just us and some friends had the whole beach to ourselves.

Lyss: Yes. It’s an extremely untouched place too; you find a lot of the coastline is.

Lyss: Yes, there’s a lot of farmland that is privately owned so to get down to the beach, you can’t, unless you go through private properties, so the beaches are just so beautiful. 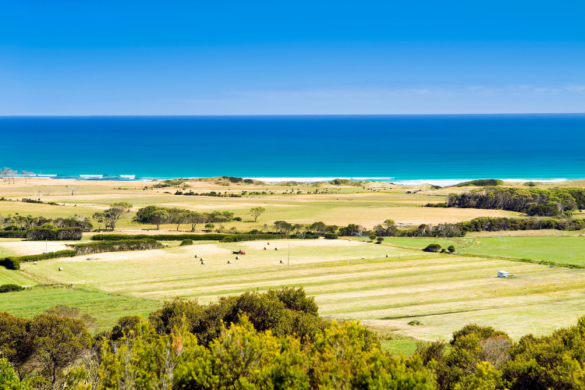 Is there a place you won’t go back to?

Lyss: Not that we wouldn’t go back there, but we found it extremely difficult for free camping or camps that were reasonable price would be the Mornington Peninsula. It was very expensive for a campsite that was essentially just a dirt patch so that’s one place that we wouldn’t rush back to.

Related: Get 100s of Discounts for your Big Lap with Our Livin’ Barry platform

Where can’t you wait to go?

Isaac: We’re sort of just taking it day by day at the moment. Especially now that WA’s borders are closed, I’d be lying if I said we weren’t looking forward to going over there, but at the moment we’re just sort of looking forward to today or tomorrow we don’t know where we’re going to be. So that’s kind of the most exciting bit about it.

Do you travel with a pet, does it restrict you?

Isaac: We don’t travel with any pets.

Any scary or funny moments on the road?

Isaac: Well, neither of us have any four-wheel driving experience at all, I think before we own the Troopy I’ve driven on the beach twice, pretty much. We’ve done a few four-wheel drive tracks in Tasmania, just because so much of the land’s untouched over there. You need a four-wheel-drive to see it all and there are definitely a few tracks that we probably shouldn’t have gone down where we carry a lot of gear on our roofs, so we’re quite top-heavy and one track in particular that we went down, we were this close to rolling on the car.

Lyss: That was very scary.

Isaac: Yes. We’re going to be a little bit more careful from now on when we go; because we’ve pretty much got our whole life in here we can’t afford to lose it.

Tell us about the item you can’t live without

Lyss: An item that we definitely cannot live without would be a coffee maker and a jet boiler, the jet boiler has been life-changing we use it every single day.

Isaac: We had it recommended to us before we left, I can’t remember who exactly recommended it, but it’s an absolute game-changer.

You can get the JetBoil here. 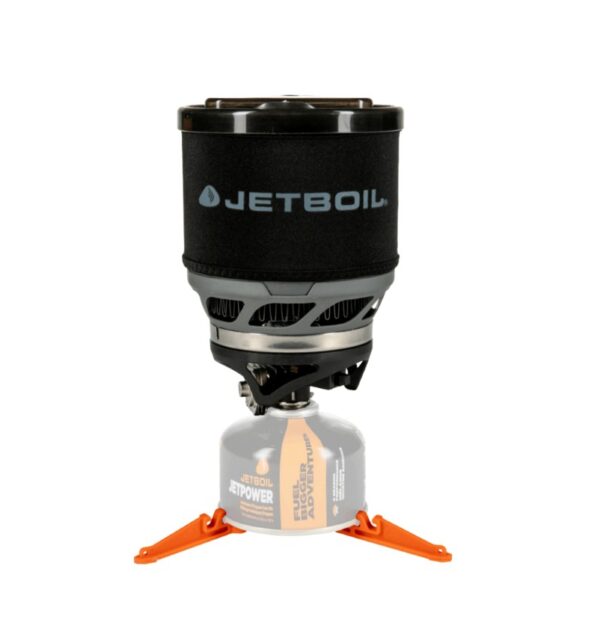 Tell us how you fund your Big Lap and budget – did you save before you left? Do you work on the road?

Lyss: We worked extremely hard in the 12 months leading up to when we left; we both worked two jobs after-hours weekends. So that was quite a lot we hardly saw each other, but that’s all good. We also rented our house out. We bought a house back in 2019, we rented it out and we make a little bit each week off the rent that we’re currently receiving. So, that definitely helps we will work on the road if the option’s there to pick up a job like, we are not fazed whether we do or don’t.

Isaac: I think if we find a place that we want to stay for a couple of weeks and there’s not much happening and we’ll just try and pick up a little bit of work.

How much do you spend and what is your biggest expense?

Lyss: We’re ranging between 500 to a thousand dollars a week and our biggest expense at the moment would be petrol. I think we’ve spent a lot more on petrol than we initially thought we would, but in saying that we have driven a lot and we tend not to park up for too long, we’re constantly chasing that next view or that next place that we’re excited to see.

What’s something you know now but didn’t before you left?

Lyss: And to not have high expectations of places that you see online or…

Lyss: Yes definitely. And Instagram can tend to be very filtered so just keep that in mind that not everywhere is as beautiful as you’ve seen it before.

What is your favourite thing about travelling?

Isaac: What is our favourite thing about travelling? I think it’s almost like just the unknown. We don’t know where we’re going to be tomorrow we don’t even know what we’re going to do today, we’ve got the freedom to do what we want when we want.

Lyss: And I think waking up in a new place every day is pretty special.

What has been your biggest splurge? Was it worth it?

Isaac: Does the car count?

Isaac: Because it’s been our biggest splurge.

Lyss: Before coming on this trip, we had a van.

Lyss: And we thought that it wasn’t going to cut it, doing the lap around doors with how much full driving you can do to get to those secluded pristine beaches. So, we sold it and decided to buy a trip courier and we ended up buying one brand new just because the resale price at the moment is through the roof. So yes, it was a very big splurge, but worth it.

Is there anything you bought but don’t use as much as you thought or it wasn’t worth the money?

Isaac: Not really. I think we’ve done pretty well sort of limiting, our purchases I can safely say we use absolutely everything in this car.

Lyss: We have purchased two double camp chess and both of them have broken on us. So we would say that they are not worth the money so don’t bother.

How were you affected by the lockdown?

Lyss: Our trip was delayed maybe two months because of the lockdowns but that was probably a blessing in disguise. There were a lot of extra things that we needed to do that we didn’t realize at the time so we utilized that time very well.

Isaac: We missed two weeks in Tasmania because they hadn’t opened their borders as well, but we still got to spend six weeks out there.

What is your biggest tip to other big lappers?

Isaac: Set out all the clothes that you want to take on your trip and then cut them in half. Honestly, we dead set only pick up the clothes off the top of the pile anyway, and it’s not like we’re going out on the town every night so putting on a stinky shirt doesn’t matter.

Where do you stay – caravan parks? Free...