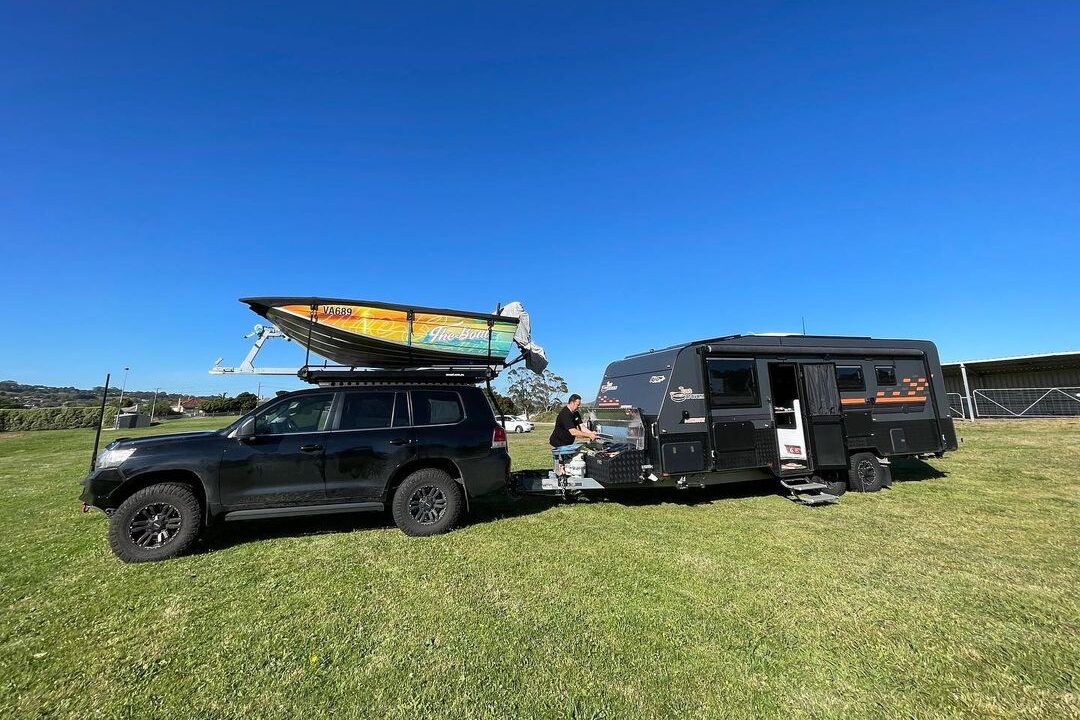 What is your set-up?

What is your set-up?

We know that it’s tricky and a lot of times confusing to decide on what to use for your Big Lap adventures. If you’re looking for ideas, inspirations and even precautions, check out these various travel/camping set-ups from our Aussie Travellers themselves.

Monique and Ryan from @endlessadventureseekers

Monique: We’re travelling in a Nissan Navarra with a camping trailer. 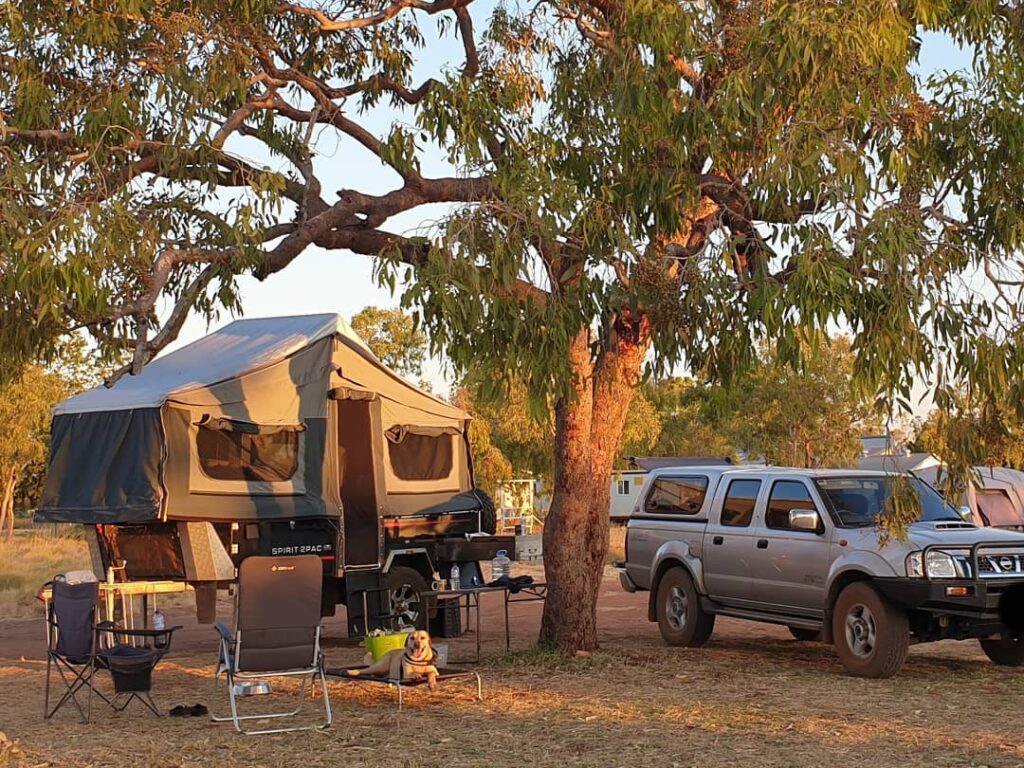 Lyss and Isaac from @thesaltycircus_

Isaac: We’re just travelling in a Toyota troop carrier, we’ve decked it out with a bit of a bed in the back, which we’ll show you soon. We don’t have a pop-top or anything, it’s a pretty simple tight little setup, but we’ve gotten used to it in the last few months that’s for sure.

Lyss: And it does the job. 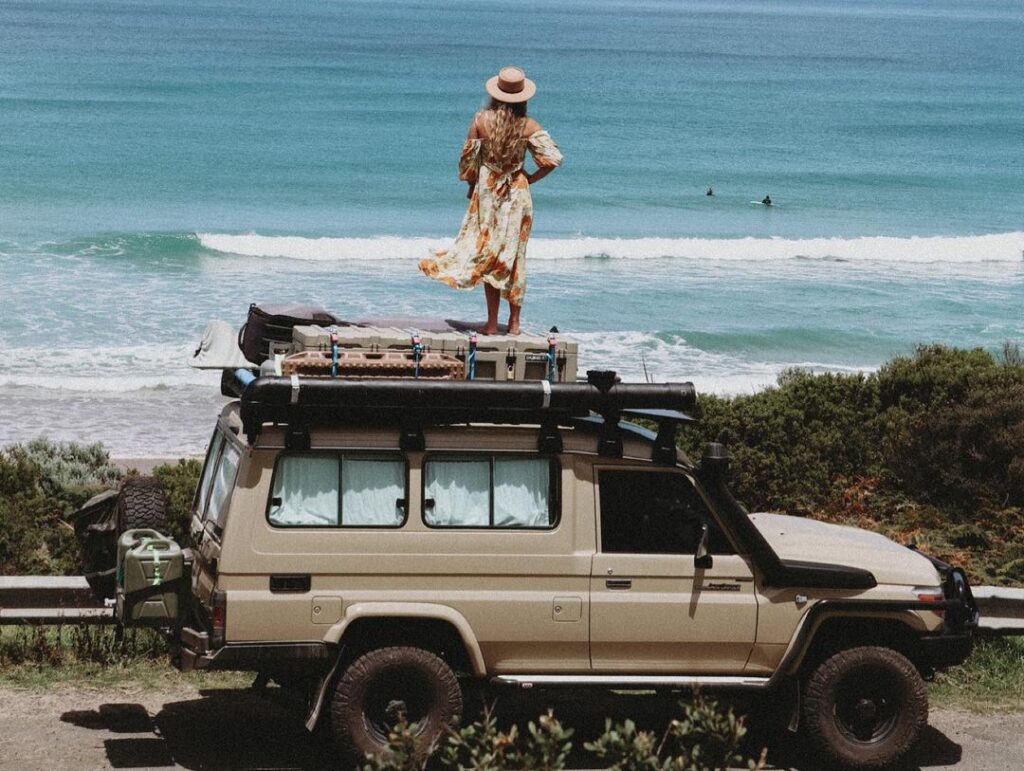 Paula and Mathilde from @backpack_withus

We are currently travelling with Charly our Green Prado and also our fourth car in Australia! We previously owned a van and two other 4WD! After trying a bit of everything I think we can agree on the fact that the set-up we currently have is the one that gives us the most freedom and the most comfort in our everyday life! Charly has a rooftop tent, two awnings and a wooden structure we made ourselves in the back. The dual battery system we set up gives us power everywhere and whenever we want which is super convenient for us and our passion for photography! I can even get my hot coffee in the morning with the mini kettle we can plug into it! After many months of sleeping in the car, the rooftop tent is definitely our go-to option! Wider, more open, you breathe and move so much better! A game changer! We’ll see if we still agree during the rainy days of the Wet though! 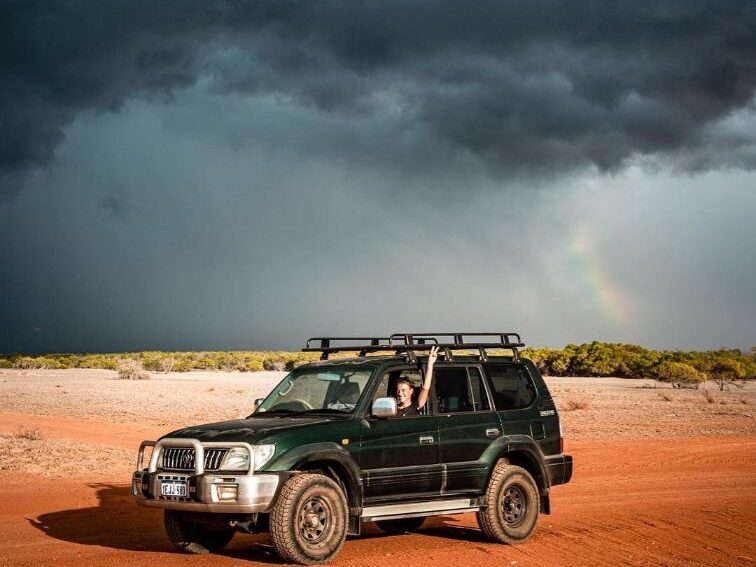 Jono and Monique from @joniquelife

So our travel setup is we are towing with a Jeep Grand Cherokee Overland, 2015 model and towing an essential exceed cruiser 26-foot van that’s fully self-contained as well. 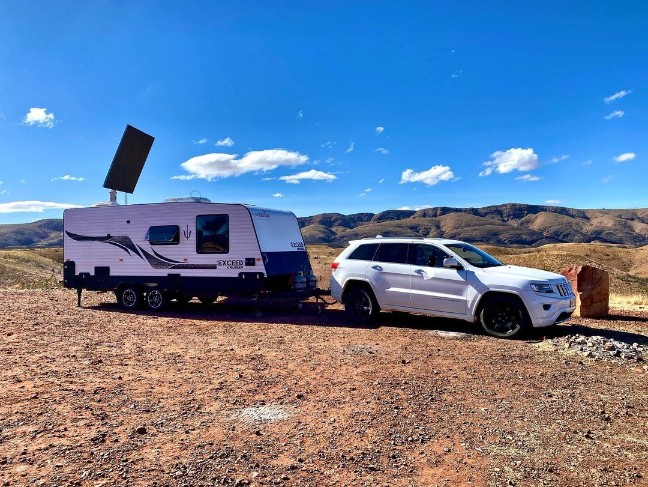 To make towing your caravan as easy, and safe, as possible, it’s handy to have a reversing camera. Read our compilated list of the best reverse cameras on the market here.

Katherine and Alex from @discoveringoz

This is the 2006 Hilux we took on the lap. It’s got a 3-inch lift. Few cases on, so we did a little bit of work to get it sort of reliable before we left and it didn’t miss a beat. 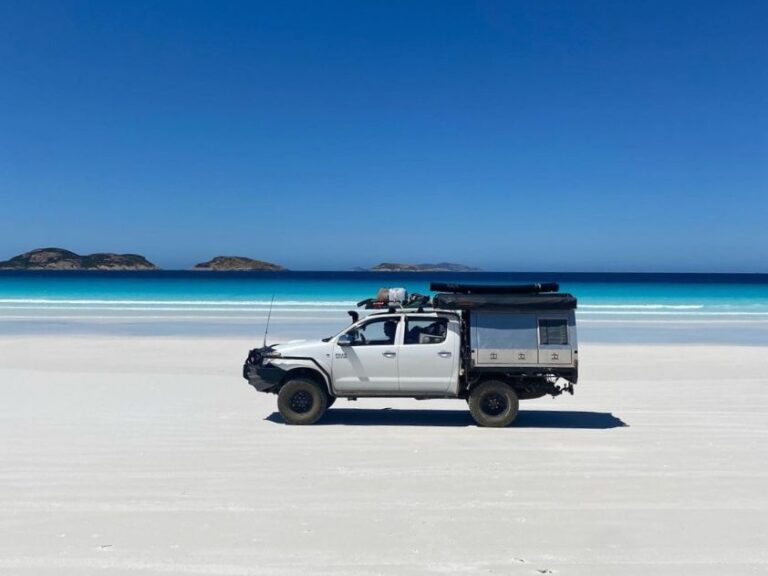 Misty, Simon and the kids from @ourorganisedtribe

Simon: We’ve got a bunkhouse by Rio from just caravans and a two VX, 200 series land cruiser.

Misty: And a boat. 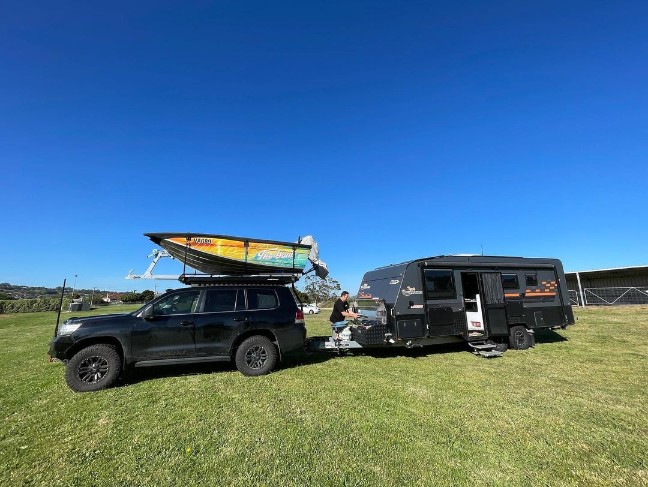 So we’ve got a land cruiser, a 79 series jewel cab. Just standard really. It’s got a two-inch lift, got a Bush company rooftop tent and just a standard canopy fit-out. My first trip away was down the road with it last year when we got it in September and we fell in love with it after that. We had a Prado before. But our plans are the future to do a full lap or at least a half a lap. Depending on what happens at work. 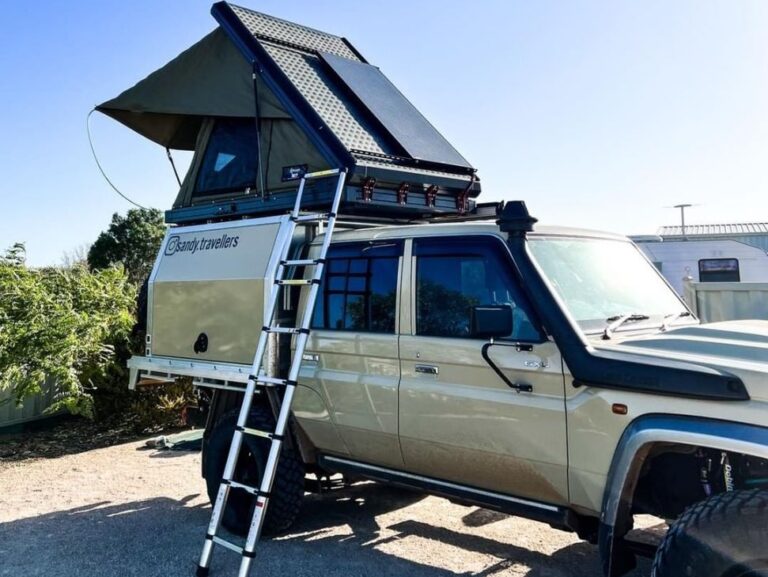 Chris and Holly from @knot2shore_adventures

Chris: We have a 1995 Evernew caravan, which we are in right now, which we’ve renovated.

Holly: Yup. It was in very good condition, but we ended up just renovating it so it’d look more modern. But we love it, we wouldn’t change it for the world. We’re also in a ‘79 cruiser, with a dog box in the back, and we also have a rooftop tinnie which we recently just bought because we started off with a boat. We loved having a boat, we love fishing, but we decided to sell that for a caravan. Now we got a rooftop tinnie.

Emma and Travis from @adderley.adventures

Travis: Alright. We have a 2017 wild track Ford and a 2021, Urban Tungsten Tuff Caravan. It’s a semi off-road fully off-grid, self-contained Caravan 21 foot, six-inch. It’s awesome. We did a few upgrades like lithium batteries and a few handy things. So it’s been pretty good. The UTE is completely decked out. We did complete levels upgrade GVM, GCM. We got an awesome draw set, fridge, air compressor, the works, it’s a pretty awesome setup. Had it tuned and bigger breaks. It’s been awesome. We’ve been off-road a bit and the rocks and the sand and it hasn’t let us down.

Emma: No, hasn’t skipped a beat. 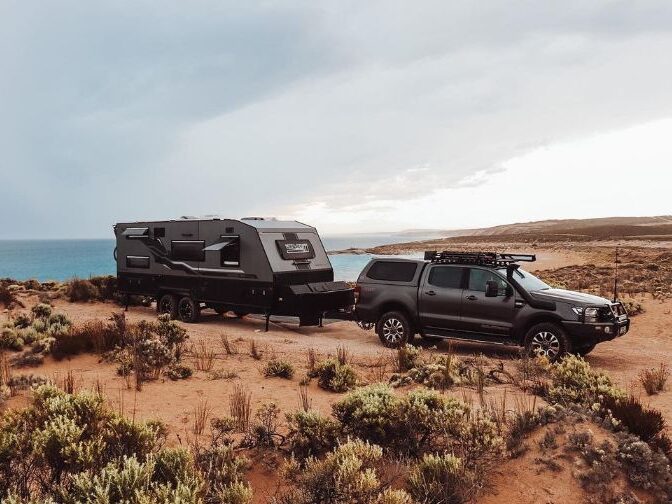 Jesse and Cheyanne from @cruisingaust

Jesse: Current setup is a Troop Carrier and then we’ve got a tinnie on the back and we also carry a bike as well on the front of the tinnie but we’ll show you guys our whole setup. 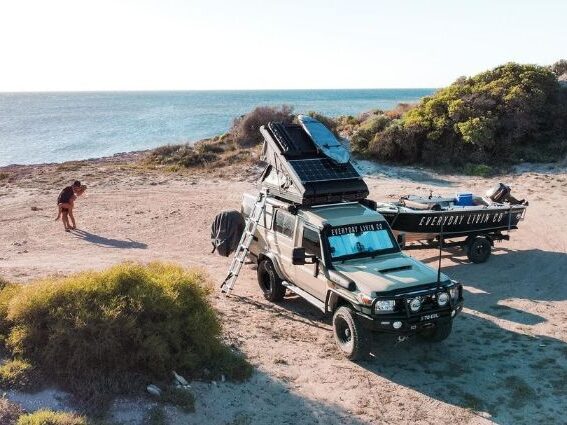 Tanikka: We have a Belmont, a bug van, we upgraded though, we didn’t start off with a Belmont or a 200 series. We started off with an Expander and a 100 series that broke down 400 billion times on the way. That’s okay we made it

Matt: Part of the journey. 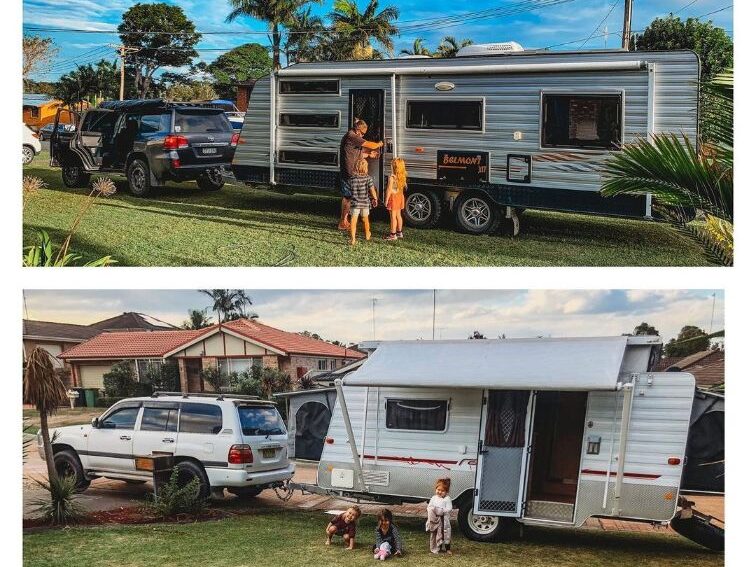 Get your own The Big Lap Bible – the ultimate guide, planner, tracker and discount book for the biggest road trip of your life here!

Rose Foster is the founder of Big Lap Bible. As an avid traveller and writer she aims to inspire Australian Big Lappers to see as much of the country as possible.

Why Did You Decide To Do A Big Lap?

Where do you stay – caravan parks? Free camps? Both?