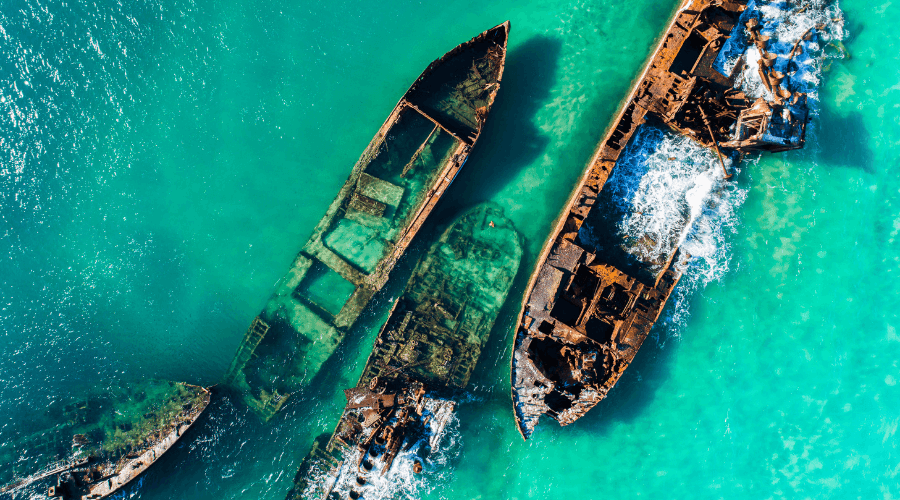 Places To SeeQLDThings To Do

Over the years, there were over 8,000 shipwrecks in Australia, and only a quarter of them have been discovered. The Great Barrier Reef scattered tens of thousands of ships of explorers looking to visit the magnificent beaches and explore the world’s longest barrier reef. Even those that survived the wrecks were ushered away by the local people. Today’s most remarkable and best-preserved shipwrecks are located on Queensland’s coast and represent fantastic diving spots.

Related: 13 Beaches in Queensland You Have To Visit

SS Yongala is a 110-metre long ship that sank in 1911, but it was discovered half a century later. It’s a fascinating dive, mainly because it’s the largest and most intact shipwreck in Australia. Today it lays between Townsville and Ayr, near Cape Bowling Green. It’s reachable by a 90-minute boat ride from Townsville or 12 nautical miles from Alva Beach.

Since it sank so long ago, it has become an artificial reef, populated by hundreds of species of sea life. Sea snakes, turtles, eagle rays, Queensland groupers, barracuda, trevally, cobia and colourful corals are just some of them. It’s around 30 metres deep; therefore, it’s suitable for advanced divers.

The Tangalooma Wrecks are widely popular because you can spot them even without entering the sea. Merely 15 minutes away from the beach at Tangalooma Resort on Moreton Island lie 17 deliberately sunk vessels. They were artificially sunk to create an exciting diving spot and act as a break wall for small boats. It’s an easily accessible shipwreck dive and suitable for beginners. The wrecks are a short swim away from the shore but be aware of the currents. Even though the wrecks are only 2 to 10 metres deep, they’re still an attractive habitat of unique sea life, including wobbegongs, trevally, kingfish, yellowtail and a variety of tropical fish.

The vivid coastal town of 1770 has a couple of mesmerizing shipwrecks along its coastline. Barcoola is one of them, a steel fishing trawler that sank in the 1990s. It lies 44 metres underwater, and it’s suitable for experienced divers only. Vast schools of fish circulate the boat, and as you approach, you might not even see it! Onboard the ship lives diverse marine life, including kingfish, cod, rays, giant cobia, and grouper. If you’re lucky, you might encounter a bull shark or bronze whaler.

Moving on to a new shipwreck, the HMAS Tobruk is a 127-metre long ship that sank in 2018. No worries, nothing wrong happened; it was retired in 2015. It was deliberately dropped near Great Sandy Marine Park to create an exciting new diving spot. It’s a year-round diving spot hence the warm waters.

HMAS Tobruk starts at 11 metres underwater, making it suitable for beginners, but experienced divers will find it interesting too since it stretches up to 30 metres below. Even though it’s recently sunk, plenty of marine life has settled around it. You can swim 100 metres inside the boat to meet them up close! If you’re in the right season, you might be surprised by migrating humpback whales!

Another deliberately submerged ship is the Ex-HMAS Brisbane, a former Royal Australian Navy warship. It operated until 2001 and was sunk in 2005. Notwithstanding the name, the ship is not located near Brisbane but on the Sunshine Coast, between Maroochydore and Mooloolaba. Lying at 28 metres underwater, it’s suitable for advanced divers.

The coastline of Seventeen Seventy hides another magnificent shipwreck, the 13-metre long Cetacea. The fishing trawler sank to the sandy bottom in 1992 and today lies 32 metres underwater. It’s an excellent habitat for soft coral, sponges and algae. Cetacea is home to Queensland groper, estuary cod, bull and leopard rays, tuna and large cobia.

The Singapore was a mountainous 87 metres long, 10 metres wide single screw steamer. It was bound to sail from Hong Kong to Sydney, but it suffered an accident by hitting Singapore rock right offshore in the late 1877s. Luckily, everyone survived, although the boat sunk. Despite the gigantic size, it was just recently discovered, and you get to be among the first generation of divers visiting it. The area around the wreck is a Marine Park Green Zone full of vivid sea life. Get face to face with numerous turtles, fishes and beautiful coral. It’s located right off Singapore Bay, on Keswick Island.

Located on the Gold Coast only 800 metres offshore lies The Scottish Prince – a 64-metre long iron ship. In 1887, the ship was sailing from Scotland to Brisbane, carrying mixed cargo including whiskey, linen and mousetraps. It suffered a terrible accident with only the hull of the boat remaining intact.

The RMS Quetta is one of Australia’s biggest tragedies, where 134 people lost their lives. It was a 120-metre long passenger and cargo boat that was sailing from Brisbane to London. After hitting a coral mount near the Torres Strait Islands, it quickly sank.

Today it’s one of the best dives but not often visited. It’s still mostly intact, making it a great exploration dive. Plenty of lush corals cover the boat, and various fish species circle it. Turtles, stingrays, sharks, eagle rays, batfish, trevally, snapper and barracuda, are just a tiny part of what you can see on site.

Read Next: 10 Queensland Events You Simply Need To Check Out!

The mighty Lady Bowen was a 66-metre long boat that sank in 1894. After crashing into Kennedy Shoal, it sailed for 48 kilometres more and eventually sank off the coast of Mission Beach.

Today it lies 34 metres underwater, and keeping in mind its age; it’s an established marine habitat. From colourful corals to sea snakes, giant turtles, sharks, rays and lionfish, you’ll be amazed at what this dive offers.

Saint Paul was a steamer that sank in 1914 after hitting Smiths Rock, right off Moreton Island. The wreck happened close to the Titanic time, and it remains a mystery why the ship that was sailing in good conditions failed and hit the rock. Today it lies upwards, 1 km south of Smiths Rock. It’s one of the most challenging dives in Queensland since it lies 38 to 42 metres underwater. The remnants are amusing, not notably intact but still a fantastic sight full of marine life. It lies at an exposed part of the sea, so early dives are best.

Many boats have suffered their worst at the Southern Great Barrier Reef near Lady Elliot Island, but Severance is the only one you can dive. It was a sailing boat that sank in 1998, remaining fully intact. Today it lies 21 metres underwater. Despite the wreck being relatively new, the marine life populating it is wildly rich. You’ll encounter striking soft corals, various fish, stingrays, turtles, reef sharks, moray eel, wobbegongs and lots of shrimps!

The Llewellyn was a 34-metre long single screw coastal steamer. It was on route from Rockhampton to Bowen on what would be its last sail in 1919 when it sank because of heavy storms.

It was only recently discovered in 1997. It’s located on the Great Barrier Reef, east of Mackay, around 35 metres underwater. The Llewellyn is a historical treasure that experienced divers have the privilege to explore. If you plan on getting closer than 500 metres to the boat, you must obtain a permit.

The Cremer was a 50-metre long passenger and cargo boat that frequently sailed between Indonesia, Singapore and China. In 1943, during a heavy storm, it lost control and crashed near Keswick Island.

Today it lies just 10 metres offshore, sheltered from wind and tides, making it the perfect dive. You can explore the remnants of the iron frame, deck, engine, propeller shaft, and flywheel. Turtles, sweetlips and grouper largely populate it while the frame is covered in soft corals.

MV Karma was a 42-metre long ship that suffered bad karma – it sunk right off the coast in December 2003, in the Bundaberg area. Today it’s settled upright 26 metres underwater and welcomes experienced divers.

Although it’s a recent shipwreck, it quickly became one of the best dives in Queensland. Divers get to explore the two-tier structure, cabins and engine room. The abundance of marine life will fascinate you. From reef fish to octopus, nudibranchs, gropers, stingrays, wobbegongs, sea snakes, turtles, and even moray eels!

Read Next: Top 23 Places To Snorkel In New South Wales

19 Free Camps You Need To Know About In Victoria

8 Incredible Sunshine Coast Experiences To Have On...