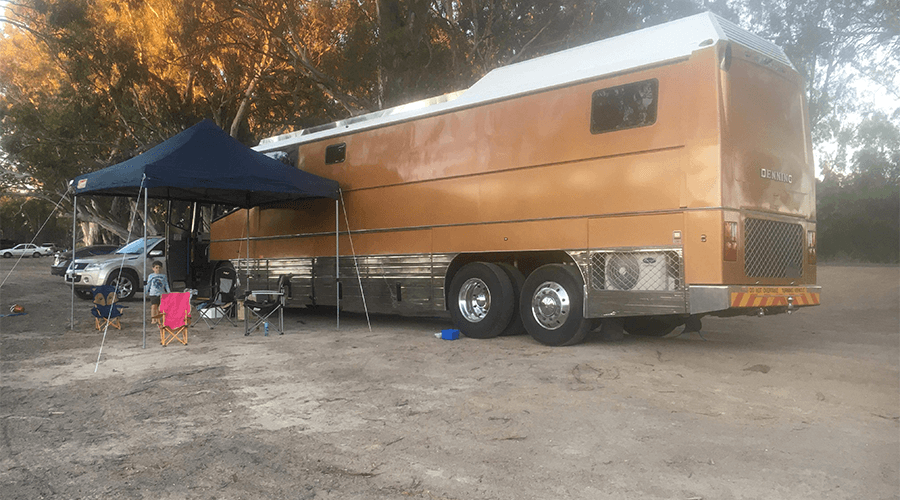 It was way more work to convert a bus than we thought! Everyone warned us…but we didn’t listen. “We’ve got this”, we used to say!

Was it worth it? Four years of every weekend, every holiday, and investing all of our disposable income into it, we can honestly say YES!

Of course we love it! But it was bloody hard work!

We bought the bus, which had just retired as a service coach, in May 2016, and I was pregnant with our son. The bus still had all of its seats, was mechanically quite sound and water-tight (or so we were told).

We drove the bus on a permit back home to Townsville, where we had an ‘oh no’ moment with the sudden realisation of the mammoth task ahead!

And so it began…

My partner has a rather handy set of skills you see; trained as a diesel mechanic, a history of all things with engines and drove road trains for most of his working life so we thought that would put us in a good position!

But from the get go it was bloody tricky! The seats were a complete nightmare to remove, I was heavily pregnant and not much help and upon closer inspection, the bus did in fact have several water leaks! The water wasn’t only leaking inside the bus but had caused significant rust behind the exterior panelling. She was going to need way more work than we first thought!

Our thoughts were “if we are gonna do this, let’s do it right”. The seats, removed; old, stinky carpet with who knows what nasties lurking inside, removed; the windows removed; and the exterior panelling removed.

What next!? Asking everyone who would listen their opinion of what materials they would use and how they would approach it!

A post shared by Driving My Life Away (@drivingmylifeaway_australia)

We didn’t have a big pot of money we could just tap into at any time. We were both working, my partner full time and me part time, as 17 months after having my son, I then had my daughter. So, two kids, both of us working and trying desperately to get the bus complete to be on our way… our dream of working and living around Australia. But it just seemed so far away! It seemed like a task just too big to complete!

We finally got her sealed, every bit of her that could be stripped, was stripped, treated and covered using premium materials.

It was at this point so many people were laughing at us, poking fun at us and telling us we were proper ‘dreamers’.

The whole process took its toll on our relationship. It was stressful, very, very, very stressful! But we kept on going.

We had laid the flooring, put up the walls and it was beginning to get exciting. 3 years in the making to get to this point. But we were at a standstill as my partner’s talents could only be stretched so far.

We primed her. Put some windows in and began to get her ready to be transported to our saving Grace – my partner’s mum and stepfather. They own an auto electrical shop and had gifted us their time and resources to complete the solar set up, batteries, and wiring. But they ended up going above and beyond. Asking friends to lend a hand, they organised a plumber to install the hot water system. A builder to build our walls. An absolute godsend!

So many hands helped in the final stages to get her ready.

My partner gave her a lick of colour and started work on the trailer, while his amazing family helped with the final process.

We bought the bus in May 2016 and she was eventually ready to hit the road in November 2020.

The bus has been such a huge part of our life, we now refer to it as ‘her’. Like she’s alive and a part of us.

It’s funny, you know, as we travel around in our home on wheels, I look around and everything has a story, every tiny detail of the bus has a story – some of them great, and some not so great – but, overall, we are incredibly grateful, proud, and lucky to be able to live the lifestyle we have wanted for so long!

Hey, I’m Rachel from Driving My Life - a converted bus we work and travel around Oz in. In tow are my partner, who is from Central QLD, our two children, and two doggos. I am originally from Newcastle, UK, and have been living in Australia for nearly 10 years. Before leaving I was in pursuit of learning more about myself and always keen for a challenge! And Australia certainly delivered! Now we live in our bus full time and the exploring and challenges have yet to stop!

19 Free Camps You Need To Know About In Country NSW