Top Posts
Top 20 Camping Chairs For Your Big Lap
The Best Reverse Cameras For Your Caravan
Our Top Tips For Feeding A Large Family...
Why Lockdown Is The Perfect Time To Plan...
22 Awesome Gift Ideas For Camping Loving Dads
Your Guide To The BEST Generators For Free...
9 Fantastic Places To Find All Your Camping...
How To Decide When To Go On Your...
8 Essential Items You Must Have In Your...
Should You Sell Or Rent Out Your House... 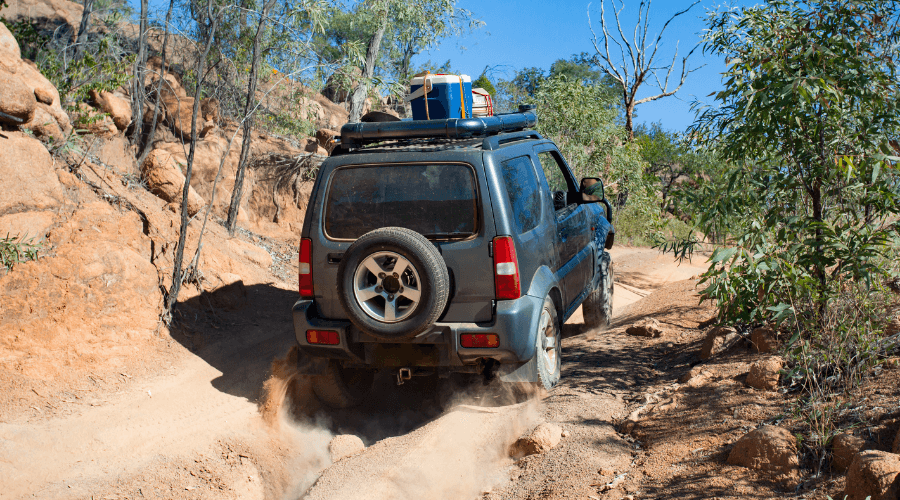 Northern Territory is home to some of the best 4WD tracks you’ll find on your Big Lap. The area features majestic national parks, gorges, falls and breathtaking views hidden a track or two away from the bitumen. If you’re willing to go off the grid while getting your adrenalin pumping, here’s a list of the best tracks.

Beware, most tracks require an experienced 4WD driver. If you’re not confident enough, stick to the sealed road to avoid unpleasant situations.

Kakadu National Park is a World Heritage site and a good starting point for your 4WD adventure through the Northern Territory. While you can access the park via a 2WD, a 4WD is the best accessory in exploring the area. There are a few tracks in the south and north sections of the park.

The Red Centre Way is one of the longest loop tracks starting and ending in Alice Springs. It’s an easy 4WD track that even beginners can dare to tackle. It starts by driving through MacDonnell Ranges, leading to Watarrka National Park. In the first section, you get to see Simsons Gap and Ormiston Gorge. At Watarrka National Park, you get to explore Kings Canyon and refresh down by the spring.

The track then takes you to Kata Tjuta National Park to admire Uluru and the nearby Olgas Rocks.
There are several excellent camps along this track for a much-needed rest, like Point Howard Lookout near MacDonnell Ranges and Ayers Rock Campground near Uluru.

Read Next: Every Free Camp You Need To Know About In Northern Territory

The camps in the area are predominantly bush, so stock up on everything you might need before starting your trip. Stay at Running Waters, Red Rock Waterhole or Palm Valley Campground.

Read Next: Everything You Need To Know About Free Camping In Australia

Sandover Highway is the real off the grid track, 560km long and completely remote. It starts at Plenty Highway, stretches to the Queensland border and ends at Barkly Highway. This track requires medium to advanced experience in a 4WD. It might seem easy at first glance, but bad weather conditions can make it a nightmare to drive. Think of very slippery, muddy holes, flooding and sandy sections. That’s why it’s best to travel in autumn and spring.

The area is very remote; there’s no coverage or roadhouses. It’s best to pack all necessities, including fuel, extra tyres and repair kits, and maybe travel with others. There are a couple of gravel pit rest areas along the road but no facilities on site.

Also known as the Reynolds River 4WD track, this loop is a short, medium difficulty route. It’s a dry-season only, 44km long trail that takes you through Litchfield National Park, the Tjaynera Falls at Sandy Creek and finishes at Daly River Road. Don’t worry; it’s not a dull track! Depending on the season, you might have to cross a few creeks and rivers. Greater Litchfield might seem short, but it takes you 3.5 hours to do it one way!

The views along the way will leave you speechless. If you feel like unwinding, there are some camps at Florence Falls or Surprise Falls Campground.

Gunbarrel Highway is Australia’s most famous 4WD track that stretches through four states, the Northern Territory, South and Western Australia. The constructor wanted it to be straight as a gun barrel and even dub a highway; that’s how it got its name! But the track is far from a highway looking – you can find landslides, floodings, giant stones, rough terrain, and sandy sections.

It’s 1,350km long with challenging difficulty. It connects Carnegie Station in Western Australia to the Victory Downs in the Northern Territory. If you’re an experienced 4WD driver with an excellent high-clearance vehicle, get ready – this track will provide excitement and challenges like no other.

You’ll need around four days to do this track, but there are great bush camps along to rest and reset.

The Binns 4WD track is a true representation of the natural beauty of the Northern Territory. Named after Bill Binns, a park ranger who served in the area almost his whole career, this track is over 2200km long and requires more than ten days. It’s a real treat for avid 4WD adventure-seekers. The trail takes you through the Simpson Desert to Alice Springs and the East MacDonnell Ranges and Gemtree.

Traversing mountains, desert and vast plains, you’ll face sand dunes, soft riverbeds, rough terrain, bitumen and muddy holes. However, the Binns Track goes through Gregory National Park, which has limited access from December through May, so plan your adventure accordingly.

Nitmiluk National Park has some fabulous spots you’ll miss if you don’t have a 4WD. Don’t expect some very challenging trek, rather beginner-friendly tracks leading to the gems of the park. Make sure to drive up to Edith Falls and get a canoe cruise on the Katherine Gorge.

Nitmiluk National Park is set on a gorge formed by Katherine River with campsites on the banks. The terrain is rocky and sandy but relatively flat and accessible year-round.

The Garig Gunak Barlu National Park is a must-visit destination; it tells a story about the two sides of Top End history in the Cobourg Peninsula. You can make the 570-kilometre journey from Darwin alone, or you can join a 4WD tour. Beware, the area is very remote and challenging; you must drive over East Alligator River at Cahill’s Crossing since it’s the only land entry to West Arnhem Land.

This is the most mysterious of all 4WD tracks you can take in the Northern Territory. There’s not much info except you have to obtain a transit and camping permit costing over $200. A permit is a must before entering Arnhem Land, or you’ll lose your vehicle. Garig Gunak Barlu National Park is open from May to October, but it’s very weather-dependent. You can be denied access if there’s been heavy rainfall recently. June to late August is the safest bet.

The Hardies 4WD Track takes you through Mary River National Park and is accessible only from May to October. It’s an easy, 25km long 4WD track but provides some of the best views and photography opportunities. The beginning of the track is the most challenging since you’ll pass numerous billabongs, river crossings, and rock formations.

Corroboree and Bird Billabong are worth stopping at as well as the Hardies Lagoon. You can stay at Shady Camp and try some fishing, but beware of the crocodiles in the area.

The Chambers 4WD track is suitable for beginner 4WD drivers since it’s easy to moderate difficulty and only 160km long. It begins at Alice Springs and continues south on the Old South Road and southeast to Chambers Pillar in the Chambers Pillar Historical Reserve. The landscape surrounding the track is magnificent, and the track itself is sand for the most part. It takes you through sand dunes, a rough low range steep decline, and some patches of corrugation. Some manage to tow a trailer too. Stay at Chambers Pillar for the night and enjoy stargazing before driving back the following morning.

The Tablelands Highway is an easy, single-lane 4WD track, a great introduction to 4WD for beginners. It’s 380km long, connecting Cape Crawford and Barkly Homestead Roadhouse. It takes around 6.5 hours to do it. Since it’s a major unfenced cattle grazing region, you can expect red kangaroos and cattle to cross your road. The track is sealed and can be done year-round, but be careful after rain. There are several rest areas along the road and good camps on the Barkly Stock Route if you decide to stay the night.

The Old Andado Track is one of the most remote tracks in the Northern Territory. It’s a 430km 4WD trek that runs from Alice Springs to Mount Dare, through Oodnadatta and the edges of the Simpson Desert.

After a rain, some sections can be closed, so it’s best to travel it during the dry season. Some areas are highly challenging, so it’s best for at least moderately experienced drivers. The Old Anando is actually part of the large Binns Track, so it’s a great option if you want to experience good 4WD without doing the whole Binns Track. The highlight of this track is the rarest tree, Waddy Tree that you can find in some sections.

Beware this is a very remote area, so pack any repair kits for your vehicle since anything can happen.
There are fantastic bush camps for which you have to be self-sufficient, but there are also ones with amenities such as Old Andado Camp.

19 Tips For Keeping Fit When You Travel Full Time